My friend and I both love pearls. Not the perfectly round type that are cultured in Japan but the freshwater pearls that many are now, it is true, ‘manufactured’ in factory rivers or beds of water, and sea pearls that come from exotic locations and are fished from the sea. The ‘grotesque’ or baroque pearls that are large and weird shapes are wonderful, and the many colours that you can get – some natural and related to the colour of the nacre of the mollusc, and some ‘encouraged’ as the pearls grow (not dyed but inserted as part of the ‘skin’ colouring) – are fascinating. When the colours are natural it is often difficult to see why they are named pink or black or green as the colours are not clear but the freshwater pearls that now come out of China and Thailand are wonderfully coloured.

I started my pearl collection in China town in San Francisco and have followed up buying them wherever I find them – Thailand, India and  Spain (yes a Chinese emporium in Madrid had a wonderfully double length rope of mis-shapen or grotesque freshwater pearls that I bought for 8 Euros which would most likely have cost me double or treble that in the UK but not thought much of in China as they are not nicely round)…and of course markets everywhere… I even have some lovely coloured Colombian pearl earrings given to me as a present as they were discovered in the South American waters in the late 15th/early 16th centuries.

Some pearls – usually those which are a more regular shape – are made from pressed pearl powder – you can tell as there is a slight rim round them if you look carefully. These are the cheapest form of pearls of course.

I will tell you a little about the history of pearls now as we recently went to a wonderful exhibition in the V&A which held the most incredible collection of pearls you have ever seen.  some there in physical form and some in paintings as many of the most famous pearl necklaces or crowns or sets had been broken up and re-made. Indeed there was one such set which had been specifically designed so that you could take it apart and wear it up to 50 odd different ways! [http://www.vam.ac.uk/content/exhibitions/exhibition-pearls/about-the-exhibition/]

Many were beyond price and had been lent to the museum by other museums. Let me tell of some I particularly remember:

Charles the First of England’s pearl earring that he wore as he was beheaded;

The betrothal necklace – probably from Darnley – of Mary Queen of Scots; (minute – she must have been tiny);

And set after set in safes that had enormously thick walls and great locks as the pearls within them were so precious….!

The Qatar collections that had been loaned to this exhibition were outstanding too as Qatar was originally one of the nations that most exploited pearls by diving for them in the oyster beds off the coast starting in the first millennium BCE at least. We saw a very informative short film about how this was done and also some exhibits that explained how the different types of pearls were formed and thus how you often got a long thin pearl, as well as round ones.

The V&A say: “natural saltwater pearls are formed by the intrusion of a parasite such as a worm or piece of sponge into the shell’s mantle, the organ which produces nacre (mother-of-pearl). The parasite displaces cells to form a cyst, over which the nacre grows.

In principle any mollusc with a shell can create a pearl, from the giant clam to the land snail. The variety of colours and shapes of pearls is unimaginable, ranging from the exotic pink conch pearl, the brown and black pearl, the blue-green abalone pearl and the Melo pearl with its orange hues.”

All these natural pearls were in great demand by Royalty and the grand nobility and those with pots of money up until the Japanese found a way to make round pearls through an ‘unnatural’ method. This method is still protected by patent. 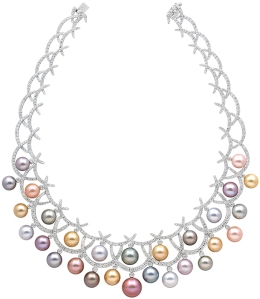 Cultured pearls from the South Seas are found in countless colours. Their iridescence and hue are dependent on the type of molluscs they are grown in and where they are farmed. So their colour is natural according to the shell of the animal – and the exhibition had many such shells on display.

The queen of all oysters, the Pinctada maxima, produces the finest South Sea pearls. These come from established farms in Burma, Indonesia, the Philippines, Thailand and along the northern coast of Australia. The common Pinctada maxima produces white pearls, the silver-lipped variety results in pale metallic-grey tints and the gold-lipped specimen creates gems with an intense golden hue.

The Pinctada margaritifera, the black-lipped oyster from the Pacific atolls, produces the famous Tahitian pearls. These are not all black. Some are white, and the black ones take on spectacular green, blue, even aubergine, tones reminiscent of the colours of peacock feathers. (V&A website).

Interestingly, it was the Art Nouveau period and the Arts and Crafts who really were into the unusual shaped pearls incorporating them into long ropes or forming into fantastic shapes, as I am a real fan of these eras and have a pearl ring which my husband gave me for our Pearl Anniversary which dates from the 1890s.

Freshwater pearls occur in a variety of colors, most of which are created naturally by controlling the diet of the ‘mother’ mollusk! White, cream, and rose overtones are seen the most. Other colors can be created using various treatment processes such as irradiation. [http://www.americanpearl.com/fr2.html]

I have a wonderful collection now of pearls and nacre pieces in necklaces and earrings in many colours and shapes, and my friend has too but not quite as many it’s true…I don’t hoard and don’t obsessively collect but pearls – unusually shaped ones – are hard to resist.

Once upon a time I was a great knitter and knitted all sorts of complicated patterns – aran, nordic, lace, fairisle and so on… some for me and some for the house – eg I was knitted a set of aran cushion covers, each cover was a different aran stitch; and of course, some for my children including jumpers with characters and even once a jazz inspired jumper for my au-pair. I then went onto to knitting with a machine, and had all the necessary extras – quite a collection in the end. I knitted for prizes for local charities even. then I got very busy with work and family life and the knitting machine went away in the spare room and then the loft. Then I got arthritis in my hands and I could no longer work a good tension. Then to cap it all my right thumb has been semi-detached from my hand – they had to cut a major tendon to stop it constantly contracting – and so my knitting suffered.

For many years after I was told that knitting was good physiotherapy for my hands I only knitted squares for blankets and even tried a simple circular crochet blanket effect. Then after the pain got too bad they injected steroids into my thumbs and lo and behold my knitting has improved! Such that I know knit all sorts for babies and charities. I confess my tension is still not all it could be and sometimes do to my fibro fog I make pattern mistakes but still I am doing better. So here are some examples of a) what I used to knit – a Kaffe Fasset cardigan I knitted in the 1980s and still have(!); and some things I have knitted more recently. The cardigan doesn’t look too bad for something that old that is still worn…

Now Kaffe Fasset was a very influential knitwear designer at that time and had lots of books out. Then things went quiet about him but recently I’ve started hearing more about his work again. He had a book out called Glorious Knitting in 1985 and this may have been where I got my pattern from. Anyway, you can look at his website on http://www.kaffefassett.com/Knitting.html to see some of his work and explore his ideas. 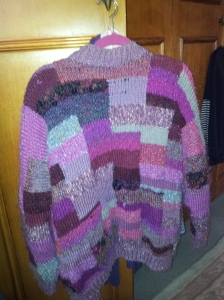 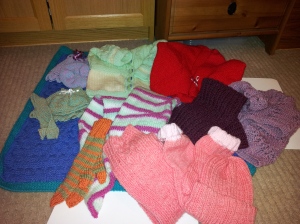 A collection of my knitted items: still colourful…

I find that I need to knit every day for at least an hour or I will wake up the next morning with pain in my fingers so… The only problem being where to buy cheap wool for these charity items. After all, as I give everything away that I knit, I can’t afford to buy expensive wools. I haunt charity shops for any cast-offs and markets for the cheapest.

If you have any suggestions of good places – especially on the Internet – where I can buy wool at around £1 per 100 grams, then please do let me know. 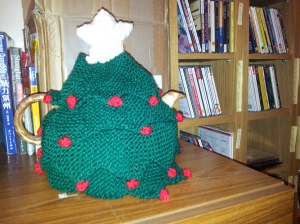 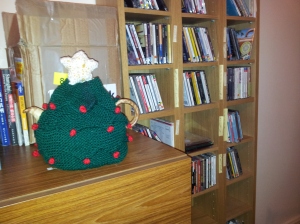 Here is the tea cosy I knitted – from both sides. The star is a bit lopsided – I couldn’t quite get the shape right… but proves it was hand-knitted!