We went to Margate to visit the new(ish, 2011) Turner Art Gallery and the Grayson Perry exhibition.

We were slightly disappointed by its architecture – not the shape but the colour – dull grey. Apparently when opened it was coloured by banners but not now and whilst the sun was shining – quite remarkable for this end of summer this year, we could envisage it being very dull indeed on a wet grey day by the sea. 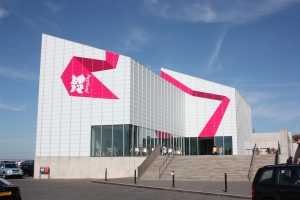 It is positioned right at one end of the huge series of bays that form the Margate sea front. By the harbour wall of what was once Meregate a small fishing village . it has been inhabited since probably pre-historic times and certainly the Romans lived there but constant invasions made life difficult during the 8th, 9th and 10th century.

Margate is situated on the coast of the Isle of Thanet, which of course, hasn’t been an island for a long time. But it was still an island when the Romans lived there and a bridge wasn’t built until the 1400s. In the 1700s you could still reach it by ferry, but the channel silted up and Reculver is now on dry(ish) land. The land still needs to be defended against the sea trying to gain its channel back and so there are sea defences all along the coastline.

Margate – which is on the outer edge and thus faces the English Channel, was part of the Cinque Ports through the control of Dover, but became independent from their control in 1857.

It is claimed to be one of, if not the first, coastal resort for sea bathing which greatly changed its status from a fishing (smuggling) harbour to a fashionable bathing town bringing with it not only boats carrying traffic down river from London but eventually also the railway. Turner lived in Margate for some years coming down by boat from London and then leaving by boat to cross the channel from there. Very convenient – and thus the Turner Gallery was built here.

However, after the flush of post war holidays in seaside resorts within Britain and then the holiday camps of Butlins  and Pontins etc decline in the 1970s, when cheap Spanish holidays came in for the masses, Margate declined.

I went to this area of coastline often as a child staying at Broadstairs, just along from Margate in a bed and breakfast establishment of which there were huge numbers. These high terraced houses are now in sad repair but, since 2011 and the Turner Gallery, some are being bought up and refurbished and becoming boutique hotels such as the Crescent Victoria where we stayed, just along from the Gallery.

The Isle of Thanet has a most amazing coastline. It is really all sand and yet more sand. Great depth of beaches that are shallow in slope so good for kiddie play which is why the area was so popular when I was a child. And now there is a seawater pool in the middle of one beach for safe swimming.

Margate is tatty round the edges but has some interesting areas around the Old Town where they seem to specialise in vintage clothes and furniture. We found two really nice places to eat – Harbour Café which did the most amazing chips; and the Ambrette which is a modern Indian – even does roast Sunday lunches with venison and other exotic meats. However, rather lacking in vegetarian food which was a shame. Still good reviews from the meat eaters – even some suggesting it is worth a Michelin Star!

And then of course there is the Shell Grotto. No visit to Margate is complete without a visit to this very interesting but unexplained and without know history, underground cavern.

Stories about when it was created range from the Phonoecians in very early history (yes they did trade with the UK) as a religious place – with an altar at the far end of these underground passageways. Or a Folly of course. Or something else entirely.

What is certain is that all the shells apart from 4 are English, it has been around a few hundred years and has been open since the 19th century to the public, and the shells have been added, altered etc at different times but some are clearly very old. Many of the patterns are symbolic eg A Tree of Life; A Corn Goddess; A Ganesha; A skeleton; A Perseus and so on….

Spooky as it is all underground and quite large – 104 feet.

What is a really nice thing to have is the Viking Trail. This is coastal path for bikes and pedestrians which is very smooth and wide and goes all around the island’s coast passing through Ramsgate and Broadstairs and Reculver too. It is 25 miles in length so you can run a marathon if you wish – but the one running when we were there did a figure of 8 and came back to its start!

Easter Saturday and we decided it would be a good thing to go out for the day. It had been some years since we had visited Brighton – a southern sea-side town not that far from London and easily accessible by train, so we decided to go. our memories of the place included lovely old buildings and eclectic shops with home-spun cafes and flea markets and antiques. In fact we had bought some of our light fittings from there for the flat when we first moved in and had carried them back by train – this had given us some very strange looks as through London commuters we carried the parts of a very large gothic chandelier plus other light fittings in bags and boxes…

So in the very bitter cold that is still Britain we set off by train and found that it being Easter Saturday, the town was heaving with people who had also decided to come out for the day… then we found that there was a flea market on and wandered the streets looking at the stalls of old clothes and jewellery and other interesting items. We bought only some stretchy scarves for my hair which we were very cheap and substituted for a hat, so nothing much was spent.

We then found another reason for all the crowds was that there was a Food Festival on too. unfortunately for us, having already had a light lunch in a pizza/salad bar, we didn’t need anything to eat, and anyway, it was largely meat that was being cooked. We looked for stalls that weren’t just about feeding the multitude but they were few and far between. We did however, find a stall selling some appropriately expensive green tea flavoured with jasmine which we were happy to pay for, as the normal green tea in the supermarkets is not a patch on what we drank in China – when we paid for it that was… It managed to snow on us lightly as we looked at these food stalls…

And that was it! The antique shops were down to one or two very expensive ones and set of stalls which had nothing that interested us, and The Lanes, which had been full of funky shops, was now inhabited by chain shops and expensive boutiques or expensive fooderies.  all the charm and funkiness seemed to have gone away – the hippy Brighton was no more…

But Infinity Foods is flourishing and growing it seems. It is a co-operatively owned enterprise and has a wonderful wholefoods/organic supermarket that seduces with all that it has available…

If you want a quiet rest and to read a paper or book even, then make your way to the Library in the centre of town as you can go in there and more or less do what you want – even a young man ate his sandwiches next to me. Nice and warm and relaxing chairs by a warm window on the world and open to all.  We had a nice rest from the cold in there.

The pier that burnt down is still derelict but the seafront has been nicely landscaped – I refused to leave Brighton until I had seen the sea – after all what is the point of going somewhere where there is sea if you don’t look at it?

The Pavilion Gardens looked rather shabby and not well looked after – I know the weather has not been good but it seemed as though there was nothing there but grass and a few trees. The Brighton Dome however was worth a look inside (it’s now a theatre) for all the amazing tiling and decoration. We didn’t however go into the Pavilion as we had been before.

Brighton Pavilion from the Pavilion Gardens

The theatre as it now is…